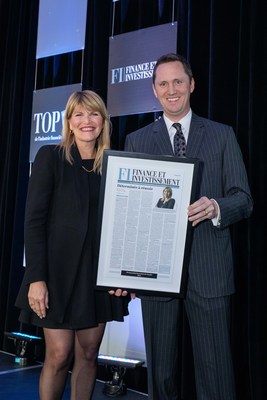 "I am very proud of this award and I share it with the team who has contributed to the outstanding growth of TD in Quebec. This means that TD is recognized as a major player in Quebec, in addition to playing an important role as a corporate citizen", says Sylvie Demers, Chair, Quebec Market, TD Bank Group.

"This is an important milestone in a very successful career for Sylvie Demers who will be celebrating 35 years at TD this year, including the past 5 years as head of the Quebec Market", says Andrew Pilkington. In addition to her work at the Bank, Sylvie supports many causes and chairs the Montreal Museum of Fine Arts Foundation Board of Trustees.

The Toronto-Dominion Bank and its subsidiaries are collectively known as TD Bank Group ("TD" or the "Bank"). TD is the fifth largest bank in North America by branches and serves over 26 million customers in three key businesses operating in a number of locations in financial centres around the globe: Canadian Retail, including TD Canada Trust, TD Auto Finance Canada, TD Wealth (Canada), TD Direct Investing, and TD Insurance; U.S. Retail, including TD Bank, America's Most Convenient Bank®, TD Auto Finance U.S., TD Wealth (U.S.), and an investment in TD Ameritrade; and Wholesale Banking, including TD Securities. TD also ranks among the world's leading online financial services firms, with more than 13 million active online and mobile customers. TD had CDN$1.4 trillion in assets on October 31, 2019. The Toronto-Dominion Bank trades under the symbol "TD" on the Toronto and New York Stock Exchanges.